With its grandiose architecture, beautiful people and downright gritty street scenes where all these elements come together, Buenos Aires is a city made for photography, and according to the founders of Фото-Рута, there is no better way to tour Buenos Aires, Argentina’s capital, than to do it through the lens of a camera.

In what is best described as a half-tour, half-photography workshop with an extra jolt of creativity, Фото-Рута takes participants through Buenos Aires’s most visually appealing neighborhoods and pushes them to test the limits of not only their cameras, but the way they see the city.

“We started Фото-Рута because Buenos Aires doesn’t have a checklist of places to visit like, say, Paris or New York,” said Jocelyn Mandryk, a Canadian photographer and Фото-Рута co-founder. “The magic of this city is more about getting lost, wandering around and eventually stumbling into a beautiful cobblestone street and taking it all in. We are here to encourage people to explore and to teach them how to convert these experiences into amazing photos.”

Each Saturday, Фото-Рута meets in a different neighborhood and gives participants an hour-long photography class in a local restaurant or cafe. Then, camera in hand, participants are split up into teams and given a list of clues (similar to a scavenger hunt) and are sent out into the streets to take photos that correspond with the clues.

There are no guides, few rules, and while it may sound simple, clues like “A good place for vampires” can have you running around all afternoon looking for the creepiest, darkest abandoned mansion in the city. The day I took the tour, my German companion and I scratched are heads as we looked over our list, trying to find items that fit with the clues: “Yesterday’s beauty”, “Better eaten the next day”, “Negative space” and “Underground muse.” It was challenging, but we passed a good time.

“This is a creative experience and we don’t want to be looking over your shoulder, telling you what to do and which aperture to use,” Mandryk said.

Aside from the list of clues, the only task participants were specifically told to do was take a portrait of at least one person. “The people of Buenos Aires are one of the main reasons we started this project,” Mandryk said. “The people here are not shy. They are beautiful, proud and very approachable. Nine times out of ten you can ask for a portrait in the street and the people will let you do it. Who knows? If you try it you might walk away from an encounter knowing someone’s life story.”

After a few hours of scavenger photo-hunting, participants meet up again at the starting point, upload their images to a computer and review the results as a group. This can make for a very hilarious and very helpful experience. I say hilarious because you get to see how different teams interpreted the clues, and I say helpful because Mandryk, a professional photographer, looks over your photos and critiques your work in a very constructive manner. 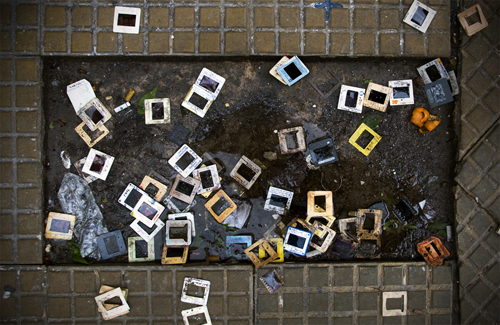 My submission for the “Negative Space” clue

Regardless of your experience with photography or the size of your camera, Фото-Рута can help anyone become a better photographer. If you’re a beginner, Фото-Рута will open your eyes to the endless photo opportunities in urban environments. If you’re a well-seasoned amateur, the tour will force you to think about photography in ways that you may have forgotten since you got comfortable with your camera.

The innovative Фото-Рута concept was hatched about one year ago by Mandryk and Becky Hayes, a British marketing director. While their most popular offering is the weekly Фото-Рута neighborhood tour (which costs USD$29), they also offer a variety of photography-related workshops and lessons.

As of last month, Фото-Рута has also begun operating in New York City with the hopes of expanding to more cities around the world. With good reason too. What better way to explore a new city other than to make a game out of it and learn useful photography techniques in the process?

Диего Куполо is a freelance photojournalist currently on the road to Tierra del Fuego. Most recently he served as Associate Editor for BushwickBK.com, an online newspaper in Brooklyn, and his work has appeared in The New Yorker, The Atlantic, The Star-Ledger, The Australian Times, Discover Magazine and many other publications. View more of his work at DiegoCupolo.com.